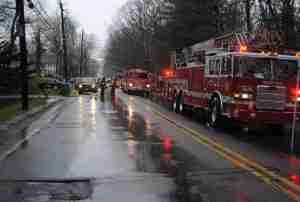 Apparatus line Kresson Road adjacent to the driveway to the fire building, rained the entire job. 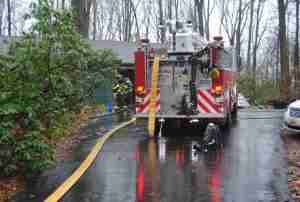 Squrt 1341 laid in from Kresson Road 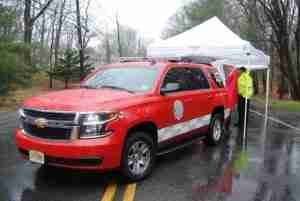 CP 1300 under the EZ Ups during the incident

C side of the fire building 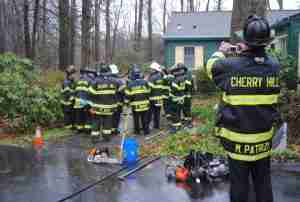 Members meet with BC K. Baum, IC after fire knockdown and overhaul for an incident critique 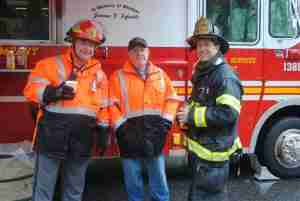 Rehab members L. Colacicco, W.Kelly, and Lt. B. Reiss acting as Safety Officer during the fire

At 14:22 hrs. Rehab 13 was dispatched to the unit block of Kresson Road near Willowdale Drive for the dwelling fire in a one story SFD done a long driveway with limited access. Cherry Hill companies arrived with light smoke showing at the roof line and the eaves. Squrt 1341 arrived and laid in from Kresson Road and placed (2) hand-lines in service. The working fire box was transmitted and the seat of the fire was located in the basement and the “all hands” box was declared. This brought additional resources to the scene including Rehab 13, Cherry Hill Fire Police, and Cascade 11-2 from Pennsauken Fire Department.

Rehab 13 responded with (2) apparatus and (8) personnel and arrived on scene and set up on Kresson Road at the intersection of Ann Drive. Rehab 13 provided liquids hot and cold, hot food, snack foods, a rest room, and deployed (2) EZ Up shelters to provide cover from the heavy rain for staff and command officers and police as well as firefighters during the incident.

Rehab 13 operated for 2 hrs. on the scene. We were released at 1620 hrs to return to re-supply and dry out all equipment.

The origin and cause of the fire is under investigation by local officials.

Photos of the scene by Lt. J. Walsh, Rehab OIC for the incident.